Jakejames Lugo is the senior editor for TheKoalition.com, and has had his writing featured in IGN, Playboy, and PixelKin. Jakejames has covered events such as E3, PSX, PAX, and NY Comic Con. He has also appeared as a guest speaker at Miami Dade College. You may view his live streams at www.twitch.tv/gamerswithgains and follow him on Twitter.com/VenomousFatman1. 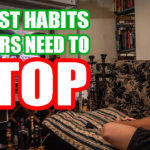 Like every activity that humans engage in that’s recreational, we tend to pick up more than a few bad habits when we play video games. These range from the most mundane and silly behaviors, to the incredibly serious and detrimental of bad habits. Though not always as life threatening as some places would have you believe, we sometimes do things that we know we shouldn’t do for … END_OF_DOCUMENT_TOKEN_TO_BE_REPLACED