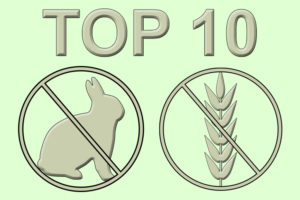 Tofu is amazing at being whatever you want it to be, from beef and pork, to chicken and scrambled “eggs”. It’s also very affordable, especially compared to its animal-derived counterparts. My favorite way to use tofu is cubed, coated in arrowroot powder, baked, and covered in a thick, garlic-infused peanut-butter sauce.

Speaking of peanut-butter, my favorite is Trader Joe’s because it’s all-natural, non-hydrogenated, palm oil-free, and so, so good. Other “natural” peanut-butter brands fail to keep palm oil out of their product, but Trader Joe’s gets it right. Whether it’s in an Asian-style sauce, or on a classic PB&J, this brand delivers.

Ok, I know it’s starting to seem as though I only shop at Trader Joe’s, but I don’t. Just indulge me long enough for me to tell you about the veggie burgers that Changed. My. Life. If you’re vegan and gluten-free, finding a burger-style patty that actually tastes good is damn near impossible, but these protein-packed, guilt-free veggie burgers somehow manage to do it. They’re perfect as a burger, of course, but also work very well as meatloaf, kafta, and kibbeh.

If having to give up mayonnaise to pursue a vegan lifestyle sounds like an unpleasant sacrifice, I have good news: Follow Your Heart Original Vegenaise actually tastes better than real mayo, and it’s completely vegan and gluten-free! With this creamy mayo alternative, you can still enjoy sandwiches, sauces, and anything else that needs a creamy, tangy kick. As a bonus, not being made from eggs means there’s zero cholesterol.

Milk is one of the most common household staples, even for vegans, and Silk soy milk is, by far, my favorite. Other soy milk brands can be somewhat chalky, overly sweet, or contain carrageenan, a highly harmful ingredient found in many foods. Silk is smooth, has just the right amount of sweetness, and contains no carrageenan. For new users, it does take some getting used to, but in no time, soy milk will be the new normal.

If sticking your face in a bag of blanched almond flour and smelling the cookie-like aroma doesn’t make you want to drop everything and make a pan right now, you have no feelings. This cup-for-cup flour replacement, while pricey, is pretty excellent at making your favorite things gluten-free. I’ve used it to make homemade gluten-free crackers, and the result was crunchy, flavorful, and very satisfying.

Chickpeas, also known as Garbanzo beans, are magical little things that prove extremely useful in a vegan’s recipe arsenal. They can be used in hummus, as a salad and soup topper, or seasoned and baked in the oven as a guilt-free snack. The most impressive thing about chickpeas, however, is the aquafaba, the water that canned chickpeas come in. The strange, thick aquafaba can be used as an egg replacer. Chickpeas are a gift that keep on giving.

Being vegan and/or gluten-free means two things: cooking all of your meals yourself, and most likely cooking lots of Asian foods. Cooking Asian foods means you’ll need soy sauce, but regular soy sauce isn’t gluten-free. So, what are your options? You could buy liquid aminos, which taste as scientific as the name suggests. You could buy tamari, which tastes nothing like soy sauce. Or you could buy Kikkoman Gluten-Free Soy Sauce, which somehow manages to taste as it should. Soy sauce is essential in dishes such as Pad Thai, Pad See Ew, fried rice, and more.

No matter what you’ve heard, being vegan and gluten-free does NOT mean you have to give up dessert. Regular granulated sugar is made with bone-char, which, as the name suggests, is an animal derivative. Raw sugar is vegan because it’s just plain, raw, sugar. It tastes the same, and can be used in all the things you use white sugar in. What I love about Florida Crystals is that their operations are powered by recycled sugar cane fiber, so it’s earth-friendly, too.

When going vegan, I worried about losing milk-chocolate, my favorite kind of chocolate. Thankfully, Guittard makes these semi-sweet chips that taste and melt just like milk-chocolate. The bag doesn’t say they’re vegan, due to the fact that they’re produced in a facility that uses milk, but a scan of the ingredients list shows that they are in fact safe for a plant-based diet.

Whether you’ve been vegan and/or gluten-free for years, or have only begun the journey, I hope this list helps you out.

Joe Saba is a writer, comedian, musician, and cook, residing in Austin, Texas. He has written for Toxic Magazine, and is the writer, editor, and star, of his eponymous YouTube channel, which features his comedy, music, and DIY videos. You can view Joe's channel at https://www.youtube.com/channel/UC-eRz0MCY74bwScXnh7hkEw and follow him on Twitter at https://twitter.com/JoeMSaba

Make sure this account has posts available on instagram.com.